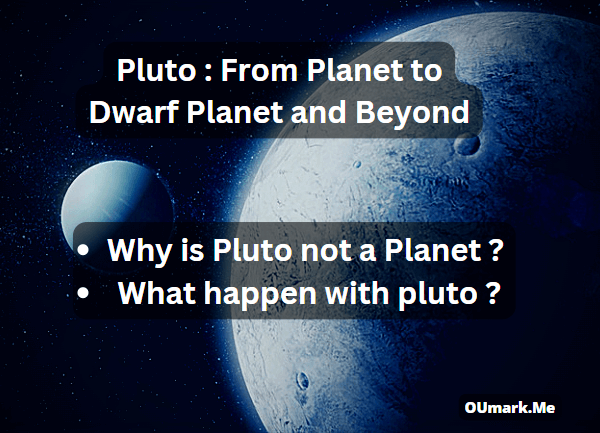 Pluto From Planet to Dwarf Planet and Beyond

Why is Pluto not a Planet ? What happen with pluto ? Our solar system has eight planets, one sun that originated about 4.6 billion years ago, four of these eight planets are gas giants and the remaining four are Rocky Planets. But I read something else in my school days. We were told that there are total nine planets in our solar system, one is the sun and you already know the ninth planet, Pluto.

The smallest and last planet of the solar system, But in 2006, the International Astronomical Union (IAU) in its 26th General Assembly granted Pluto the status of a dwarf planet. But many people ask me in the comments why Pluto was destroyed. Doesn’t Pluto exist anymore? Or does Pluto still exist today?

Today, we will learn the story of Pluto.

In 1977 the Voyager spacecraft was launched. First voyager 2 and then a few days later voyager 1 were launched and these were the first spacecraft that helped us to see the gas giants of our solar system closely and even after turning off the cameras installed in them, they still continue their journey even today. But in voyager missions we missed Pluto. We couldn’t see Pluto closely. 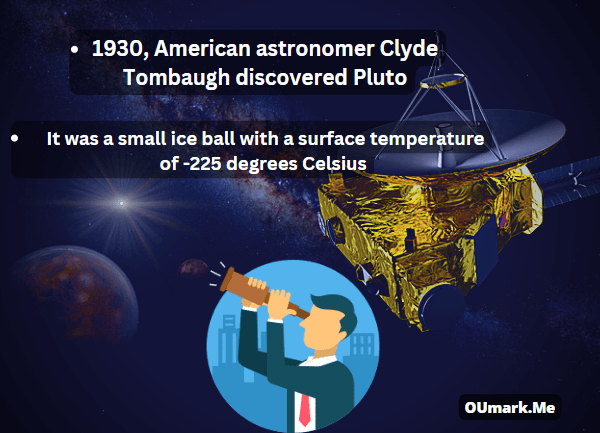 In 1930, American astronomer Clyde Tombaugh discovered Pluto, which was later declared the ninth planet of our solar system. At that time, astronomers believed that Pluto would be larger in size than mercury. But many scientists didn’t agree with this. Pluto was very different from other planets in the solar system. It was a small ice ball with a surface temperature of -225 degrees Celsius.

Pluto’s orbit is different from most of the rest planets. Almost all other planets whose orbit is circular, Pluto’s orbit is extremely electrical. It orbits the sun at an angle of 17 degrees and takes about 248 Earth years to complete one orbit. You might think of how big 1 year of Pluto is, but even before Pluto was discovered sstronomers had taken pictures of it, 3 but at that time they did not pay attention to it.

In 1840, French mathematician Urbain Le Verrier had predicted Neptune. Through his mathematical calculations, he saw that something was making an impact in the orbit. So in the analysis of this, he had discovered Neptune. But after Neptune’s observation, astronomers noticed that Uranus’ orbit was being disturbed not only by Neptune, but also by something behind it. After all, what was it?

Astronomers went into the search for it, and then in 1906, the American mathematician Percival Lowell started a project. The Search of a Possible Ninth Planet, which he named Planet X. In 1915, two blurred pictures of Pluto were taken in his survey without Lowell’s knowledge but at that time no one paid attention to it.

After that, Lowell’s project was closed due to some legal proceedings, but in the year 1929, the project was started back. Clyde Tombaugh was entrusted with the task of finding planet X and then after a year of hard work, on February 18, 1930, Clyde Tombaugh finally discovered Pluto. 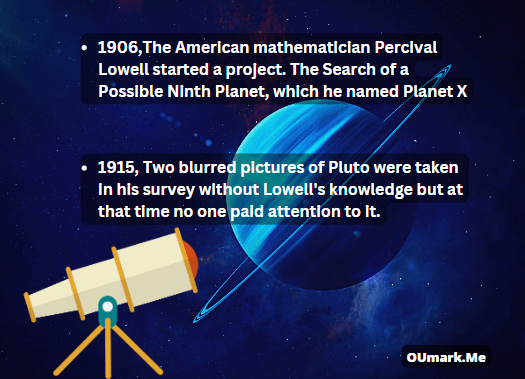 Pluto became quite famous among the people only after its discovery and became the new member of the solar system, the Ninth Planet. But initially Pluto’s size and whatever mass was calculated. It was slowly being proven wrong. In the beginning, astronomers thought that Pluto’s mass was equal to the mass of our earth, but as more studies were done on it, we found that its actual matss was much less than our calculations.

When Pluto’s moon Charon was discovered in 1978, we were able to measure Pluto’s actual mass for the first time. And we found that its mass is only 0.2% compared to our mass of Earth and its size is very small. It is so small that its gravity could not have had any effect on the orbit of Uranus. Due to this, it was removed from the category of Lowell’s plan. But Pluto was still a planet, but right now we do not have a clear image of Pluto.

Astronomers were largely involved in studying the structure of Pluto, but for its actual structure and information, we had to travel 7.5 billion kilometers from the Earth to Pluto so that we could see it up close. But going to Pluto was no small thing because it required a very accurate time, angle and speed. If any of these messes up, we’ll just lose our ambition.

The voyager mission, carried out in 1977, helped us to take a closer look and study at the gas properties of our solar system but Pluto was still left over from us.

On January 19, 2006, NASA launched its New Horizons spacecraft. It was the first spacecraft to be sent to Pluto, which was to see Pluto closely after its 9-year-5-month journey, i.e., in 2015. New Horizon is designed in a very special way. And resorted in Jupiter to reach Pluto early. Yes, Jupiter’s flyby gave this spacecraft a gravitational slingshot, making its speed 20% faster and on January 15, 2015, New Horizons finally managed to reach its destination. But Pluto was not the last goal of the New Horizons but it also had to go towards the Kuiper belt after that.

Because of this, we didn’t have much time for the study of Pluto but yet in such a short time, New Horizons provided us with almost a lot of information about Pluto, which helped us to know Pluto better. But did you know that the New horizon spacecraft, which was the first spacecraft to go to Pluto. Along with it, Pluto’s discover Clyde Tombhaug’s bone remains   were also sent. Yes, and that’s the greatest honor for any astronomer.

The remains of the person who discovered Pluto in 1930 were sent to Pluto in 2015. It’s really a great honor for him who made all this possible. But in 2005, another new body was discovered. Which was also farther away from Pluto and 27% more massive than Pluto, which was named Eris.  In this, the International Astronomical Union was forced to redefine the definition of the planet, and then in the 26th General Assembly of 2006, they introduced new rules for naming anybody planet, which were as follows.  Any object will called as planet only when firstly it revolves around the sun Secondly, he has so much match that he can maintain himself in an almost spherical shape. Pluto both follow these rules. But the third one which was a new rule was to keep the planet clean around its neighbourhood that is it orbits the object floating around it either make rotation around it or collide with it and join it. This is the third criteria that Pluto could not follow and because of this it was put in a new category. From then on, Pluto has been announced as the dwarf planet.

But Pluto is not the only dwarf planet in our solar system but there are four other dwarf planets that revolve around the sun. So Pluto has neither been destroyed, nor are we capable enough to destroy a planet. Pluto has only been classified into another category.

This is the story of Pluto. After Pluto was declared a dwarf planet in 2006, we were able to see it closely in 2015 but the journey to the new horizons is still not over.  Today Clyde Tombhaug’s remains are still traveling in space far away along with New Horizon.

So that’s all for today. From this article of I Hope, you have learned something new about Pluto. I’ll see you in another new and fresh article.